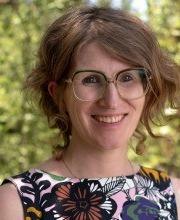 My name is Anna Gutgarts, I am a post-doctoral fellow at the Martin Buber Society of Fellows at the Hebrew University, specializing in urban development in Europe and the Latin East in the Middle Ages. Mainly I focus on the reciprocal connections between socio-economic structures, changes in the cityscape, and climate change. In my dissertation, supervised by the late professor Ronnie Ellenblum and professor Iris Shagrir, I dealt with Jerusalem under the Frankish rule (12th century), analyzing phenomena such as inter-institutional competition and its impact on urbanization and the connections between the city and its rural hinterland, and comparing the activities of Jerusalemite institutions inside and outside the city.

More recently I have been dealing with urban disputes and their influence on the changing cityscapes of socially complex urban environments, and urban imagery in medieval chronicles and encyclopedic compilations. In another joint study with Professor Ellenblum, we analyzed the dwindling urban environment of certain regions in medieval Rome, connecting it with the Medieval Climate Anomaly.

I teach the course Historic Cities, which deals with the concept and structure of European cities from late antiquity until the present.